A Path Toward Abolishing Nuclear Weapons 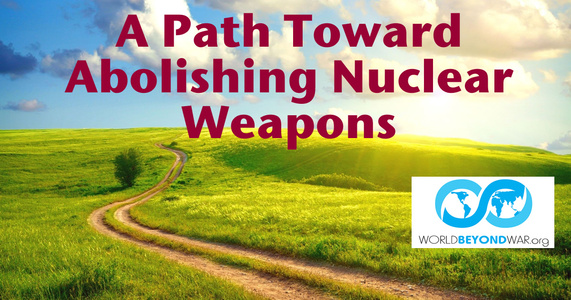 --Take up the Russian and Chinese proposal since 2008 to ban weapons in space.
--Take up the Russian and Chinese proposal to negotiate a cyberwarfare ban.
--Take all nuclear weapons off high-alert and separate the warheads from their delivery systems.
--Reinstate the ABM treaty and get U.S. missiles out of Poland, Romania, and Turkey.
--Dismantle NATO, and pull it back from Russia’s border immediately.
--Remove U.S. nuclear weapons from Turkey, Germany, Netherlands, Belgium and Italy.
--Support the treaty being proposed by 127 non-nuclear nations to ban all nuclear bombs.

127 countries now support creating a treaty to prohibit and ban the possession, use, transfer, or development of nuclear weapons. The Non-Proliferation Treaty (NPT) in which five nuclear weapons states (U.S., UK, France, Russia, China) promised to make “good faith efforts” to eliminate their nuclear weapons while the rest of the world promised not to acquire them, doesn’t ban the weapons.

It is expected that a special UN Working Group for Nuclear Disarmament created by the UN with the help of civil society and friendly governments will move forward on a UN resolution this fall to establish negotiations for a ban treaty! See: http://icanw.org

The holdouts for supporting the ban treaty are the nuclear weapons states, as well as those countries that are part of the U.S. nuclear alliance around the world including NATO states, and in the Pacific, Australia, South Korea, and Japan.

World Beyond War's work on this is led by Alice Slater who also represents the Nuclear Age Peace Foundation at the UN.

Through World Beyond War members in each country.