To: I am petitioning American citizens 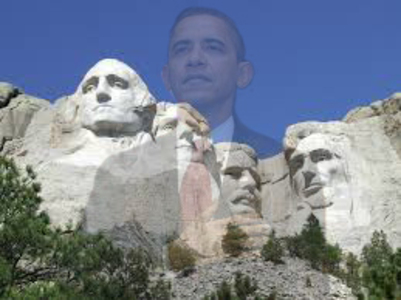 This petition is to have President Obama's likeness carved into Mount Rushmore beside Presidents Washington, Jefferson, Lincoln and Roosevelt. Greatness of this magnitude deserves appreciation that is equal to the accomplishments these leaders have provided. President Obama has been such a leader. The historical accomplishments during his tenure in office are widespread and his mistakes have been few. There has not been a greater resurgence of America posterity since the days of Theodore Roosevelt.

The reversal of the great Recession of 2008 by the Obama administration can only be described as historic in nature. The strides in civil rights, healthcare, equality, international affairs and world peace are only a few of the tremendous accomplishments Obama has been able to provide to the American people. During his entire two terms in office, he faced a defiant Republican agenda that stopped at nothing to ruin his Presidency, thwart economic prosperity and derail progress that would help America recover from the Recession. Through all of this, President Obama has been able to out maneuver Congress and move our nation from the brink of economic disaster back to prosperity. A very vile, racist segment of American society has tried to deny this truly great leader the recognition he deserves. This petition is designed to right these wrongs. We seek to acknowledge the great achievements of a great President through an act of appreciation equal to the leadership he has provided the United States in one of our most desperate times of need. Please join me in acknowledging President Obama for what he is... One of the greatest American Presidents of all times.