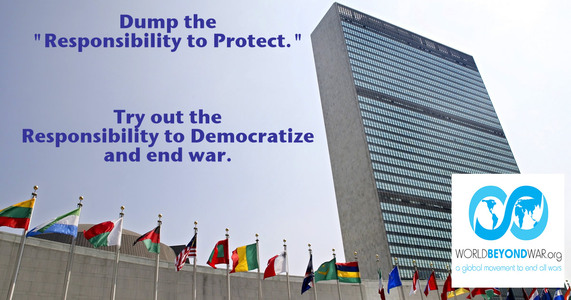 The U.N. Charter was ratified on October 24, 1945. Its potential is still unfulfilled. It has been used to advance and misused to impede the cause of peace. We urge a rededication to its original goal of saving succeeding generations from the scourge of war.

Whereas the Kellogg-Briand Pact forbids all war, the U.N. Charter opens up the possibility of a "legal war." While most wars do not meet the narrow qualifications of being defensive or U.N.-authorized, many wars are marketed as if they meet those qualifications, and many people are fooled. After 70 years isn't it time for the United Nations to cease authorizing wars and to make clear to the world that attacks on distant nations are not defensive?

The danger lurking in the "responsibility to protect" doctrine must be addressed. Acceptance of murder by armed drone as either non-war or legal war must be decisively rejected. To fulfill its promise, the United Nations must rededicate itself to these words from the U.N. Charter: "All Members shall settle their international disputes by peaceful means in such a manner that international peace and security, and justice, are not endangered."

To advance, the United Nations must be democratized so that all people of the world have an equal voice, and no single or small number of wealthy, war-oriented nations dominate the UN's decisions. We urge you to pursue this path.

World Beyond War has outlined specific reforms that would democratize the United Nations, and make nonviolent actions the primary activity engaged in. Please read them here.
http://worldbeyondwar.org/reforming-united-nations

We will deliver it in New York.