To: Keifer Sutherland and Kathryn Bigelow

Admit that torture does not work 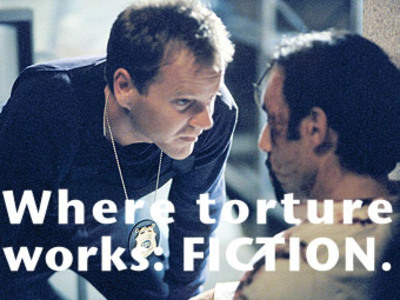 Admit awareness of the fact that torture does not work in real life.

The popularity and acceptability of torture have soared in the United States and around the world. This is not simply because the United States has tortured. The U.S. government, many of its policies, its wars, and key torture supporters have not seen similar boosts in popularity.

A major contributor to torture's improved image has been Hollywood, led by two productions that have popularized the false belief that torture can produce life-saving information. The U.S. Senate report's summary makes clear that torture has not worked in the real world. In fact, torture has generally not been used to stop an imminent attack, and has been used in some cases to compel agreement with lies about Iraqi links to al Qaeda -- lies aimed at starting a war.

The fantasy situation in which a torturer knows his victim has life-saving information that cannot be obtained elsewhere, and that his victim won't lie, and that torture will work better than legal interrogation exists only in fiction. But belief in it creates acceptance of torture.

Experts agree on this, but people need to hear it from the fictional experts they've heard of for it to seem real to them. People need to hear Keifer Sutherland, star of "24," and Kathryn Bigelow, director of "Zero Dark Thirty," admit that torture does not work in real life.

Sutherland and Bigelow don't need to criticize or apologize for their art. They don't need to begin self-censoring. They just need to admit that they are aware of the facts, that torture did not help find Osama bin Laden, that torture has not prevented deaths or destruction -- quite the contrary.

U.S. torture has been a recruiting bonanza for anti-U.S. terrorist groups. This fact is trumpted most loudly by defenders of torture and opponents of releasing reports, photos, or videos of what was done. The open secret that we need key public figures to acknowledge is that there's no up-side to weigh against the harm done.

On March 1, 2015, the Independent claimed to change everything with this headline: "Revealed: How torture was used to foil al-Qaeda 2010 plot to bomb two airliners 17 minutes before explosion." The claims in the article are not well documented and quite possibly entirely false. There is no evidence that questioning without torture wouldn't have worked as well or better than torturing. The bomb in the story may have been planted in the first place as retaliation for torture. And the serious argument against torture is not "It's just wrong" but that allowing it creates its widespread use and contributes to other brutal policies including war that kill and injure countless people driving forward vicious cycles of violence. Torture creates enemies, causes horrific suffering, and dehumanizes the torturers including those who passively allow it. A torturer cannot know that someone has lifesaving information and is most likely to reveal it under torture. And once we pretend that a torturer might know that, we cannot stop the torturers from torturing large numbers of people.

Learn more with:
Gareth Porter: How the CIA Covered Up Its Lie on Torture and bin Laden
http://www.truth-out.org/news/item/28060-how-the-cia-covered-up-its-lie-on-torture-and-bin-laden