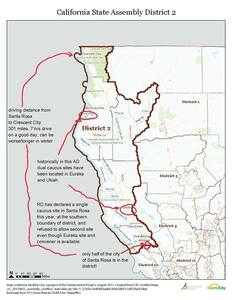 The California Democratic Party must convene an ADEM in Humboldt County. Everything is in place - we have procured the same site used in the last election, and Democratic conveners and volunteers are ready and willing to conduct the election!
Please check out the Campaign Facebook Page (above comments) for direct link to our challenge letter!

Every two years, the California Democratic Party (CDP) holds state-wide elections in a process called Assembly District Election Meetings (ADEMs). These are important Democratic Party elections where 1/3 of all delegates are elected to two-year terms to conduct the business of the CDP. There is no vote by mail or proxy voting in these elections.

Debra Broner, regional director of our assembly district (AD 02), has decided to eliminate the physical election site available for the rural voters of Northern California. She has designated only one polling station - Santa Rosa, in Sonoma County - at the farthest southern edge of this vast district! However, more than 50% of registered Democrats in AD 02 live outside that county. We are asking for your help to reverse this decision.

This is a significant part of the Democratic Party structure and we are being disenfranchised from participating. We can't expect our people to take one or two days off of work to drive down, vote, then drive back. We have secured the same location as prior ADEM elections. We also have enough local Democrats willing to volunteer to run the entire election. We are making this as easy as possible so that we don’t risk our lives driving needlessly down to Santa Rosa for one election.

"The Republican playbook is voter suppression,” says DNC Chair Tom Perez. We read about voter disenfranchisement in the national headlines and yet now we have it here in our own rural backyards! At the same time, our California Democratic bylaws, Article VI, Section 1(a)(5) “Assembly Districts and Assembly District Meetings” specifically allow multiple meeting sites for “good cause” including “the necessity of travelling very long distances” and “traveling in hazardous weather conditions.” Northern AD-02 definitely meets these conditions especially in the wintertime.

If the site is not approved, rural Democratic voters of Northern California will, in effect, be disenfranchised by their own political party!