To: Academy of Motion Picture Arts and Sciences

Don't give an Oscar to "The White Helmets" 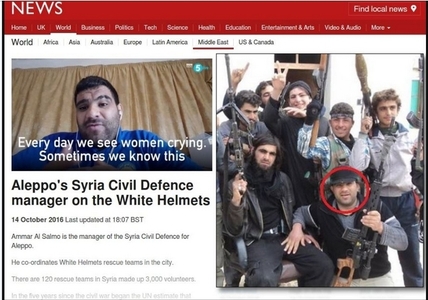 Do not give a 2017 Academy Award to the netflix movie titled "The White Helmets" .

The netflix movie titled “The White Helmets” is one of the contenders to win the 2017 Academy Award for best “short documentary”. Here is why the movie should NOT receive this award.

* It is more infomercial than real documentary. The film-makers never set foot in Syria. Some footage from inside Syria appears staged.

* Claims that the “White Helmets” are apolitical volunteers are false. White Helmet leaders actively campaign for US/NATO enforced “No Fly Zone”. The White Helmets only operate in areas controlled by the armed opposition, primarily Nusra/Al Qaeda.

* “The White Helmets” organization is a creation of foreign powers supporting the ‘Contra’ war to overthrow the government of Syria. The White Helmets were initiated by a British military contractor with major funding from the USA and UK. The “White Helmets” brand is managed by a New York based marketing company called “The Syria Campaign” directed by an Irish American woman who has never been to Syria. This is primarily a media campaign with the netflix movie being one of their promotions.

* The White Helmets stole the name Syrian Civil Defence from the legitimate organization which has existed since the 1950’s and which is a founding member of the International Civil Defense Organization. When armed terrorists invaded Aleppo in late 2012, they stole equipment and killed real volunteer rescue workers from the authentic Syrian Civil Defence.

* When the Syrian Government recaptured east Aleppo in December 2016, nearly all civilians rushed into the protection of the government controlled areas. They described abuse by the “terrorists” and how civilians who tried to flee had been killed by the armed groups. They described how the “White Helmets” prioritized support to the armed fighters and did little to help civilians.

* In late December 2016 Nusra / Al Qaeda terrorists seized the villages, spring and water pumping station in the Barada Valley that supplies clean water to Damascus. They poisoned the water, then blew up the pumping station stopping the flow of water to 5 million people in Damascus. The White Helmets were among the groups allied with Nusra carrying out this atrocity.

“The White Helmets” movie is symbolic of the disinformation and deceit in the war on Syria.

“The White Helmets” movie deserves an award for advertising and war propaganda but NOT as a documentary movie.

For detailed information see the exposes of the White Helmets by writers such as Jan Oberg, Vanessa Beeley, Rick Sterling, Max Blumenthal, Scott Ritter. Jan Oberg provides a listing with links in his extensive article "Just How Grey are the White Helmets and Their Backers?" See the 5 minute video titled "The White Helmets - Al Qaeda with a Facelift".

By email to leadership of the Academy.