To: Fairfax County School Board

The Fairfax County School Board unanimously adopted a new procedure for renaming schools. We're moving into phase 2 where we want the name to be changed to Justice Thurgood Marshall. 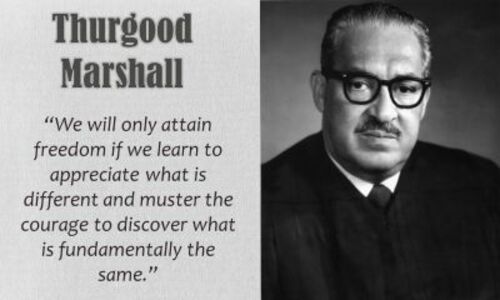 Our schools support parents as they teach their children values. Segregation and racial supremacy are not American values. In 2015 is it embarrassing for a suburb of Washington, DC and home of Justice Thurgood Marshall to have a high school bearing the name of a Confederate general who fought for white supremacy and slavery.

In 2015, it is inappropriate for Fairfax County to continue to honor a Confederate general 150 years after the Civil War by having his name attached to a diverse public high school. The Confederacy fought against the United States of America to maintain a system of white supremacy and slavery. Instead, Fairfax County should honor long-time Falls Church resident Thurgood Marshall who, as head of the NAACP Legal Defense Fund, was the chief architect of the legal strategy to dismantle segregation. As a result of his brilliant advocacy in Brown v. Board of Education, the U.S. Supreme Court declared racial segregation in the schools unconstitutional. While on the Supreme Court, Justice Marshall issued numerous opinions stressing the vital importance of equal educational opportunities for all children.

On October 2, 1967, Thurgood Marshall was confirmed as a justice on the United States Supreme Court. In 1968, Justice Marshall and his wife moved to the Falls Church area in Fairfax County. He lived in the very high school area that the present JEB Stuart High School is located until he died in 1993.

The petition will be delivered to the Fairfax County School Board in person by representatives of several groups and alumni.

Petition is successful with 1,474 signatures

Media attention is growing regarding Northern Virginia schools with Confederate names. The J.E.B. Stuart alumni have joined with us and the NAACP calling for the name to be changed to Thurgood Marshall.