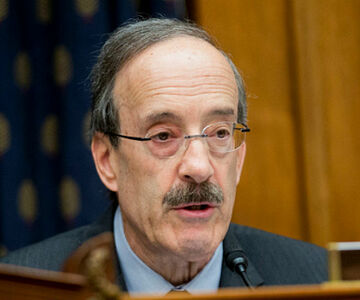 Rep. Engel's foreign policies views are well to the right of the vast majority of Democrats.
He was among the right-wing minority of Congressional Democrats who voted to authorize the illegal, unnecessary, and predictably tragic U.S. invasion of Iraq. He has opposed efforts to end U.S. support for Saudi Arabia’s bombing of Yemen, which has killed many thousands of civilians outright and threatened millions more with starvation and disease.
He was one of only a handful of Democrats to oppose the Iran anti-nuclear agreement.
He has opposed the withdrawal of U.S. forces from Afghanistan, called for expanding NATO to include Ukraine and Georgia, and supports Morocco’s illegal annexation of occupied Western Sahara. He has defended the Israeli occupation and illegal settlements, Israeli bombing of civilian targets, and praised Trump for moving the U.S. embassy to Jerusalem, and attacked the United Nations, the World Court, the European Union, and human rights groups for criticizing Israel's right-wing government.
Despite Rep. Engel's seniority, the Democratic Party must not give the chair of this important committee to someone whose views are closer to Trump and the Republicans than the majority of Democrats.