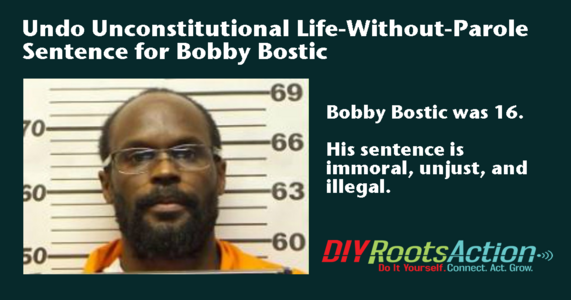 Overturn the unconstitutional life-without-parole sentence for a non-murder crime for this juvenile. Bobby Bostic was 16. His sentence is immoral, unjust, and illegal.

Bobby Bostic was only 16 years old when he was sentenced to 241 years in prison for non-fatal crimes. He is now 38, and will not be eligible for parole until he is 112 years old. Despite two recent U.S. Supreme Court rulings that determined life without parole sentencing for juveniles who have not been convicted of murder to be unconstitutional, the state of Missouri has repeatedly refused to offer Bobby an appeal. We must stand with Bobby in his effort to take his appeal, if necessary, to the U.S. Supreme Court.

In 1995, Bobby Bostic and an older accomplice were convicted of 18 crimes stemming from an armed robbery and carjacking. While the older accomplice pleaded guilty and took a plea bargain for a 30-year sentence, Bostic took the case to trial. He was found guilty on all counts and was given the maximum possible sentence: 241 years.

"Two of the Supreme Court's rulings in recent years have barred judges from imposing sentences of life without parole for juveniles who haven't killed anyone," reports Riverfront Times. "But Missouri is one of a small number of states arguing that doesn't apply to defendants who aren't technically sentenced to life without parole — even if their sentences add up to just that."

In addition, the Missouri Supreme Court has defended its ruling by claiming that the U.S. Supreme Court rulings pertain only to defendants convicted of a single charge, not multiple charges added together. "In practice, that means Bostic would have been better off committing a single act of murder than being convicted of multiple, non-fatal crimes," noted Doyle Murphy, a journalist at the Riverfront Times.

Bostic's sentence also violates the Convention on the Rights of the Child, a treaty to which every single nation on earth other than the United States is party, and which is therefore international law. The treaty states: "Neither capital punishment nor life imprisonment without possibility of release shall be imposed for offenses committed by persons below eighteen years of age."

While Bobby Bostic awaits his parole date in over 100 years from now, his accomplice will be eligible for parole next year. The case of Bobby Bostic illuminates the punitive nature of the U.S. criminal justice system. Instead of managing prisons as spaces of rehabilitation, the U.S. Department of so-called Corrections has made it a point to punish offenders in the most retributive ways possible, depriving juveniles like Bostic of any meaningful opportunity to obtain release.

According to the ACLU's state legal director, Tony Rothert, "Bobby Bostic should get a chance to show that crimes he committed as a teen do not define him. The Constitution demands nothing less."