To: Government of Bangladesh 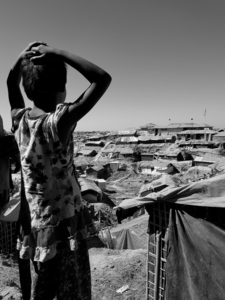 The government of Bangladesh MUST lift the internet ban in the 35 Rohingya refugee camps in Cox's Bazar, where internet access has been shut down since September 2019

The Rohingya have suffered decades of systematic persecution in their home country of Myanmar. They have been denied citizenship, freedom of movement, access to education and health services. They have been subject to land confiscations, arbitrary arrests, forced labour, extortion, torture, rape, mass killings, the destruction of whole villages and other forms of collective punishment. Myanmar military clearance operations have forced more than 800,000 Rohingya to flee over the border to Bangladesh since August of 2017. Myanmar stands accused of genocide against the Rohingya at the International Court of Justice.

The Myanmar government disputes the allegations and has failed to create conditions that would enable the Rohingya to return safely to their homelands. Bangladesh now provides shelter to approximately 1 million Rohingya.

The Bangladesh government’s internet blackout and phone restrictions at Rohingya refugee camps are currently obstructing humanitarian groups from addressing the COVID-19 threat. The shutdown is risking the health and lives of over a million people, including nearly 900,000 refugees in Cox’s Bazar and the Bangladeshi host community by hindering aid groups’ ability to provide emergency health services and rapidly coordinate essential preventive measures. Aid workers and community leaders rely on WhatsApp and other internet-based communication tools to coordinate emergency services and share important information in the camps. The shutdown prevents effective dissemination of coronavirus information as well as impeding aid workers’ ability to conduct “contact tracing” to contain transmission of the virus.

Rohingya survivors also need to use the internet and mobile phones to maintain links with home and contact family members with whom they have been separated from due to the genocide. It is also their only means to access news and information. The internet is the primary source of education for youth in the camps, who have severely limited access to formal schooling. The internet and phone restrictions must therefore be permanantly lifted.