DO NOT EXTRADITE JULIAN ASSANGE to the USA

This petition was a success. On January 4, 2020, the judge ruled against extradition. However, she did not rule on grounds of protecting journalism and publishing from prosecution. So, the struggle goes on. 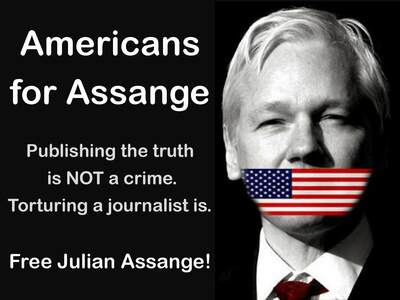 Judge Baraitser - We urge you to DENY the extradition request of the Trump Administration.

ENDORSED by the National Lawyers Guild and Veterans for Peace ....

The correct decision is to NOT extradite Assange for the following reasons:
(1) The Extradition Treaty between the UK and USA prohibits extradition for a political offense. (Ref a) It says "extradition shall not be granted if the competent authority of the Requested State determines that the request was politically motivated." The essence of Assange's "crime" is that he published documents and videos which revealed the reality of US military and political actions.
(2) Assange would not get a fair trial in the US. He has been publicly prejudged by prominent political leaders. Secretary of State Pompeo declared Wikileaks is a "non-state hostile intelligence service." (Ref b) Former Vice President Joe Biden has called Julian Assange a "hi-tech terrorist." (Ref c)
(3) These charges would set a precedent where the US claims the right to seize a citizen of any country and to judge them by US laws without the rights of a US citizen. (Ref d)
(4) The US breached Assange's right to client-lawyer confidentiality. During the last year at the Ecuadoran Embassy, a contractor for US authorities spied on Assange 24 hours a day, seven days a week, including during his private meetings with lawyers. (Ref e)

This case goes to the heart of the public's right to know what is being done in their name. The information provided by whistleblower Chelsea Manning, and published by Assange's Wikileaks, primarily concerned the US-led invasion and occupation of Iraq. Many people, including former UN Secretary General Kofi Annan, say the invasion violated international law and breached the UN Charter. (Ref f) Yet there has been little or no accountability. Instead, US authorities seek to punish and imprison for life a journalist and publisher who dared to broadcast the actual consequences of this aggression, scenes such as shown in the video "Collateral Murder." (Ref g)

The Trump administration seeks to criminalize what was previously considered a press freedom. Already the model of the Assange indictment has been copied by the Brazilian government in a criminal complaint against journalist Glenn Greenwald. A NY Times op-ed warned, "This blunt approach gives the government enormous leverage over journalists and, in the United States, provides them with a detour around First Amendment concerns. If these cases become templates that prosecutors in the United States and other nations follow, virtually every investigative reporter will become vulnerable to criminal charges and imprisonment." (Ref h)

We are counting on British independence and justice.

Do not extradite Julian Assange to the United States!

By mail and email.

Petition is successful with 5,284 signatures

We have over 200 signees but need many more. Please consider sharing the link and ADDING A COMMENT as to why you signed. The judge will see this petition and our comments! Thank you!