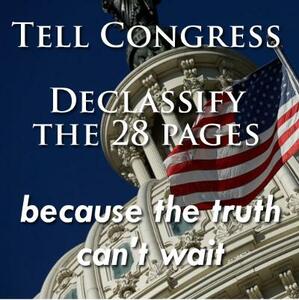 Remember the ‘missing 18 minutes’ of the Watergate tapes? They’re nothing compared to the missing 28 Pages of the joint House-Senate Intelligence Committee report on 9/11 that have been kept secret since President Bush classified them in 2002. Now we must obtain the release of the 28 pages that have been denied to the 9/11 family members and the American public, and contain evidence required to ensure national security today.

Remember the shocking revelation that the Bush White House let 140 Saudis fly out of the country in the days immediately after the 9/11 attacks, even though it claimed 15 of the 19 hijackers were Saudis? One of these flights had two dozen bin Laden family members on board and another had elite Saudi royals including Prince Ahmed bin Salman, a reported intermediary between Al Qaeda and the House of Saud. Then, causing great concern to high-ranking members of the Congressional Joint Intelligence Committee which in 2002 produced the first investigative report of the 9/11 attacks, the Bush administration blacked out 28 full pages that document members of the Saudi royal family as the principle financiers of the Sept. 11 attacks. Despite promising 9/11 family members that he would release them, President Obama has so far maintained the suppression of these 28 pages.

Former Senator Bob Graham, who co-chaired the Joint Intelligence Committees' investigation, has said that the 28 pages “primarily relate to who financed 9/11 and they point a very strong finger at Saudi Arabia as being the principal financier.”

Graham has also said that the 28 Pages reveal the Saudi funding
came primarily through the Saudi Embassy in Washington, D.C. The Saudi Arabian Ambassador at the time was Prince Bandar bin Sultan, the very same Bandar nicknamed “Bandar Bush” by George W. because of his longstanding close affiliations with the Bush family.

In addition to Graham, both co-chairmen of the 9/11 Commission and even former CIA Directors have called for their release. All of the members of Congress who have read the 28 pages are saying that releasing them would not compromise national security. Quite the opposite. On June 2, Representative Thomas Massie (R-KY) went so far as to say that the 28 pages contain the "best intelligence" we have for preventing another 9/11. Senator Graham has said the U.S. government’s shielding of Saudi Arabia’s role in funding extremism helped pave the way for the rise of ISIS.

The content of the pages is so shocking that Massie has also stated: “I had to stop every couple of pages and … try to rearrange my understanding of history … It challenges you to rethink everything.”

On June 2, 2015, Senators Rand Paul (R-KY), Ron Wyden (D-OR) and Kirsten Gillibrand (D-NY) introduced a Senate bill, the Transparency for Families of 9/11 Victims and Survivors Act of 2015 (S.B. 1471) – the companion bill to bi-partisan House Resolution 14 (H.RES.14). S.B. 1471 mandates the immediate declassification and release of the 28 Pages. We need your help to get a filibuster-proof majority of Senators to read the pages and become co-sponsors.

Over 70 percent of the 400 questions compiled by the 9/11 Families Steering Committee for the 9/11 Commission -- many on the U.S.-Saudi relationship -- were never answered, and now the Supreme Court has allowed the 9/11 victims’ families to sue the Saudis in federal court. They need your help to get the 28 Pages finally released.

We will hold a press conference and deliver the petitions in person to members of Congress.