To: U.S. House and Senate

Vote for TPP and I'll Never Vote for You 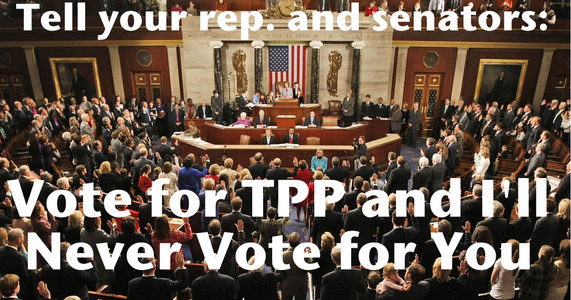 If you don't oppose and vote against the Trans-Pacific Partnership, I will not vote for you in any future primary or general election in which you are a candidate.

The TPP is a disaster that towers over considerations of gentility and lesser-evilism. This is Congress, as our supposed representatives, giving the power to overturn its own laws to corporations. This is NAFTA on steroids, economically and environmentally destructive at home and abroad. Most of it has nothing to do with trade, but is rather about empowering banks and corporations with powers that couldn't be passed separately or transparently because they're too terrible and unpopular.

It's time we take a stand against wrecking the world, even with corrupt politicians who can find someone slightly more corrupt to run against.

Here are the senators who voted for Fast Track:
http://1.usa.gov/1GtAdTH

And the House members who voted for Fast Track:
http://1.usa.gov/1GAl1TT

Let them know the consequences if they vote for the TPP.

By every means possible.